Richelieu Rock is a huge underwater sea mount that rises up from the sandy sea bed at depths of fifty metres or more. With nothing else above or below the surface for many miles in every direction, this horseshoe-shaped pinnacle is home to thousands of fish and invertebrate species, and visited by pelagic creatures including the largest fish in the world. 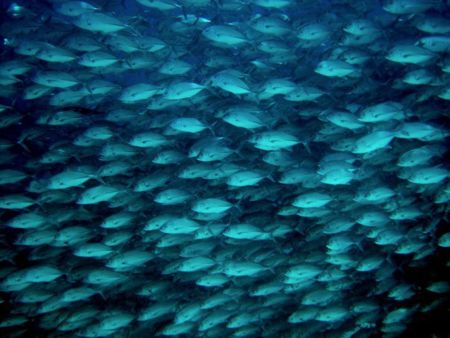 Large School of fish Photo by Emmy AhlénAlthough it’s possible to visit Richelieu Rock on a day trip from Khao Lak in Phang Nga province on the mainland, anyone wanting to go from Koh Lanta would need to be on a diving liveaboard trip. The dive site is far out to sea, not far from the border with Burma (Myanmar) and is not near any islands, but considered part of the Mu Ko Surin National Marine Park. There are many reasons why divers come as far as from Koh Lanta to dive at Richelieu Rock, and the most common is the chance of seeing Whale Sharks (Rhincodon typus) which are often seen cruising by. These graceful, but huge, filter feeders are the largest fish species known to science and can grow to well over 10 metres in length. They pose no threat to divers, and likewise aren’t particularly bothered by them. They swim slowly, often near the surface, meaning that divers are often able to spend time with them, which is more than can be said for other shark species at Richelieu Rock.

This dive site is not just about Whale Sharks, however. There are other large pelagic species, including Manta Rays (Manta alfredi) and lots of schooling predatory fish. One must also remember that there is absolutely no guarantee of seeing a large and special fish, shark or ray at Richelieu Rock, but with such a healthy selection of corals jutting up from the seabed in the middle of nowhere they tend to be attracted to ‘The Rock’ for much of the diving season. To help both the marine life and divers alike, the water is usually crystal clear around this pinnacle, allowing for divers to see further in all directions. 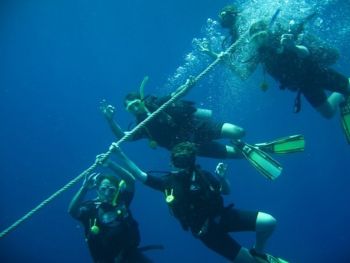 Divers on mooring line Photo by Emmy AhlénOne must be prepared and experienced though, as the disadvantages of exposed seamounts far from land are obvious in the sea conditions. Waves at the surface are quite common, due to the fact that there is no land to offer shelter from winds. In addition, the healthy marine life that call Richelieu Rock home are spoilt by nutrient-rich water passing by almost twenty fours hours a day. To divers, this water means medium to strong currents. Currents are often present at Richelieu Rock, purely because there is so much deep water in every direction, and each dive should be planned by the tour leader or Divemaster in order to make the most of them. There’s a certain amount of shelter inside the horseshoe and around its edges at certain times, but the currents, depth and amazing marine life can cause poorly-prepared divers to have to end a dive sooner than expected due to using their air more quickly.

Richelieu Rock is not just about waiting for something large to swim by in the deep blue sea. In fact, many divers visit the site and can’t take their eyes (or camera lenses) off of the rocks, corals, anemones and sponges. Nooks and crannies all over contain tiny creatures which are often not seen at other dive sites in Thailand and the colours and healthy habitat here, along with great visibility, make it a macro-lover’s delight. There is some debate about the origin of the dive site’s name. Viewed from a distance, such as the surface, the dive site has a very red appearance, mainly due to the soft corals which cover so much of it. Therefore, some believe that the expanse of red caused early divers to name it after Cardinal Richelieu, a French nobleman in the 16th and 17th centuries, who often wore deep red robes. Others say that the dive site was named after the Thai Royal Navy’s first and only ever foreign-born naval commander-in-chief, who led the country’s navy at the turn of the 20th century. Andreas du Plessis de Richelieu was from Denmark, and died in 1932. Whatever the reason for naming this remarkable dive site, it’s certainly a ‘must’ for any serious diver who visits Thailand.