This dive site, known as ‘The Cathedral’ is located at Koh Haa Yai, which means word for word ‘Island Five Big’ but really means it’s the biggest of the five islands in this archipelago. It is situated a very short distance southwest from the main Island Koh Haa 3, which is home to The Lagoon. While there is a small bay and a beach at Koh Haa Yai, it is much smaller than that at Island 3. Koh Haa Yai is really just visited by those wanting to explore this amazing dive site. 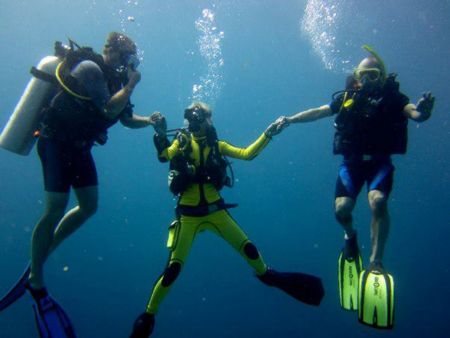 Divers at The Cathedral Photo by Emmy AhlénEven if for some weird reason all the fish and other creatures left this dive site, it would still be an awesome place to visit and dive at. Such is the beauty of the way the light works its magic inside The Cathedral cave and the slightly challenging journey that divers must make through the swimthroughs, that there really is no need for marine life. But of course there is life here, and lots of it. Although rarely visited by large species such as Manta Rays (Manta alfredi) and Whale Sharks (Rhincodon typus) there are plenty of other exciting things for divers to see here. They include reef fish, shelled and soft invertebrates, marine reptiles and beautiful coral formations and anemones, all complimenting one another and the limestone walls, caves, and swimthroughs. However, the eyes of most divers who haven’t dived here before will be in awe of the intricate tunnels leading to, and the stalactites hanging from inside, The Cathedral itself.

Although a certain level and experience is required to dive The Cathedral, it is not reserved for professionals or those with at least 100 dives. Those who have never dived before or who are taking part in a PADI Open Water course are not qualified to dive here, but almost all certified scuba divers are. The caves and swimthroughs may sound a bit daunting for some, but with a PADI Divemaster and a relaxed and adventurous attitude, the reward is more than worth the effort. The entrances to the caves are only underwater but not at depths to worry even recently-certified Open Water divers. They lead into the cavern which gives The Cathedral its name and divers can surface there and either take some photographs or just gaze at the awesome view. There is no light from the sky inside the cavern, but neither is there any need for diving torches. This is because the area is lit up by daylight travelling from under the surface of the water. The effect is an eerie glow but enough light to see the stalactites hanging from the cavern’s ceiling. There are in fact three caverns in the network, with one smaller one further ‘inland’ but that is for more experienced divers, and everyone’s remaining air supply needs to be carefully considered. However, on a standard dive, it’s quite normal for ‘fun divers’ to have plenty of air to be able to enjoy the reef and its life outside the entrances before entering the swimthroughs and enjoying The Cathedral in all its glory. 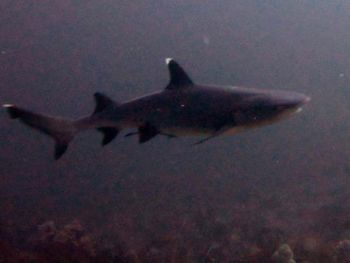 Whitetip Reef Shark (Triaenodon Obesus) Photo by Emmy AhlénWhile there is very little chance of seeing anything large and exciting at The Cathedral, that doesn’t mean that there’s nothing of interest here. Outside of the cave entrances there are plenty of reef fish and some pelagic species swimming around the rocks, boulders, corals, anemones and sea fans. Depths are a little over 20m and most of the good stuff is around the southern side of the island, which is the side facing open sea and therefore getting nutrients from the currents. Leopard / Zebra Sharks (Stegostoma fasciatum) are very common in this part of Thailand and appear quite happy to be photographed by divers. They only get up and swim away slowly when people get too close. These bottom-dwelling sharks are nocturnal, and spend their days resting on the bottom. They are sharks, but with grinding teeth on the underside of their heads and tails as long as their bodies, they don’t look like the sharks we see on tv and in movies. A much more exciting species, but a very shy one, is the Whitetip Reef Shark (Triaenodon obesus). These are real predators, but no threat to humans. They don’t grow much more than 1.5m in length and tend to hunt across the reef at night. In the daytime, they are usually seen at depth facing a current, but can be seen swimming in shallower waters from time to time. Squid and octopuses are often seen at The Cathedral, as are a number of crabs, shrimps and nudibranchs. Fish include Parrotfish (Scarinae), Pufferfish, such as Porcupine (Diodon holocanthus) and even the occasional sighting of the cute Yellow Boxfish (Ostracion cubicus). Out from the reef, a few species of Barracuda (Sphyraena) are often reported, swimming is schools and looking for prey. The list goes on and on, with different species reported on every dive.

As mentioned before, most divers come to The Cathedral to experience its amazing swimthroughs and caverns. The currents and visibility are normally good for diving, but there are occasional bad days. Koh Lanta boats come here every day of the diving season, and divers always go home happy.