For obvious reasons, Shark Point gets its name for the extremely high chance of shark sightings by divers there. However, there's a lot more to this dive site than seeing sharks. In fact, the sharks themselves are nothing particularly special, whereas the fish and invertebrates on show here make for a wonderful diving experience for divers of most levels and amounts of experience. The dive site consists of three underwater pinnacles, the highest of which just about breaks the surface, making it easy for boat captains and Divemasters to locate. 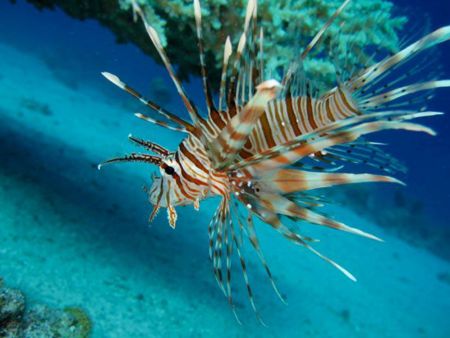 Lionfish (Pterois) Photo by Emmy AhlénThe local name for Shark Point is Hin Musang, and it is officially protected by the authorities, although you may not realise this when seeing how many boats and divers visit during the diving high season. This shouldn't put you off, though, as it's a large enough dive site to accommodate plenty of groups and the mass of marine life here are accustomed to seeing divers.

Starting at the northern end of the dive site is the only pinnacle which breaks the surface. From there, divers will see that the area has plenty of life and colour spreading down and out towards the south. Depending on the currents, divers will enter the water at the north or south end and descend to their maximum pre-planned depth. This is up to about 24 metres at Shark Point. 24 metres may not sound very deep for some more experienced divers, but with so much to see at and around that depth, 45 minutes can pass in what feels like no time and it's time to think about a safety stop. Why does time pass so quickly here? Well, that can only be answered when one sees what lies below the sometimes choppy surface here halfway between Phuket and Koh Phi Phi. 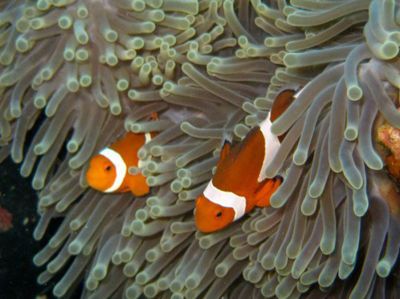 Clown Anemonefish (Amphiprion Ocellaris) Photo by Emmy AhlénThe amount and variation of marine life here is far more exciting than a few resting Leopard / Zebra Sharks (Stegostoma fasciatum) or hiding Bamboo Sharks (Hemiscylliidae). In fact, the former is very common in this part of Thailand, and becomes less exciting each time a diver sees one. The latter is normally hiding under a rock at depth, waiting for dark. When the water is clear enough, divers will be gobsmacked when they first put their faces underwater, seeing the vast array of anemones and soft corals covering the pinnacles which make up the dive site. A wide selection of reef and pelagic fish can be seen swimming around, along with the chance of marine reptiles, such as sea snakes or turtles. Obviously, with all the anemones, there are Anemonefish (Amphiprioninae) using the anemones as protective homes. Other characters from 'Finding Nemo' are Moorish Idols (Zanclus cornutus) and several different species of pufferfish, including the cute Yellow Boxfish (Ostracion cubicus). Another small and yellow bony fish that many budding photographers come here in search of is the Yellow Tigertail Seahorse (Hippocampus comes), although it is very difficult to spot. Some reports say that this little chap hangs around at a depth of 18 metres on the northern pinnacle. Lionfish and Scorpionfish are both venomous and feed in similar ways, but are quite different from a diver's point of view. The Lionfish (Pterois) swim freely and alone waiting for opportunistic snacks. They know that almost nothing in the water will come near them, so they do as they please. They're very attractive and come in a range of sizes. In contrast, Scorpionfish (Scorpaenidae) use camouflage to hide on rocky surfaces, waiting for unsuspecting small fish to swim near their lightning-fast mouths. Because of their excellent disguise, and the chance of currents at Shark Point, divers must be very careful not to accidentally touch one when temporarily holding on to a rock or coral.

There are lots of different species of large and small fish which hang around here in large schools, the bigger ones normally trying to predate on the smaller species. A popular large fish normally seen swimming slowly alone is the Potato Grouper / Cod (Epinephelus tukula). Although it's a little too shy to get close to photograph, it's a large and harmless fish which is worth looking out for.

Sea conditions are normally favourable for certified divers throughout the diving season. Those who are new to diving or don't like depth or current will need to pick their day to dive at Shark Point. Visibility is out of the hands of humans, but even when it's low there's plenty to see close up. However, when it's good, it's great. Shark Point (Phuket) or Hin Musang is a wonderful dive site and one that Koh Lanta diving centers regularly visit.