Garang Heng is an excellent diving site for divers of all levels, providing that the conditions are right. It’s neither too deep nor too extreme to be dived by inexperienced divers, but it is easily interesting enough to be enjoyed by those with plenty of experience. The top of this cylindrical pinnacle is about 6 metres from the surface, and there is no buoy. Therefore this dive site is not suitable for snorkellers, and not ideal for DSDs (Discover Scuba Dives – those who have never dived before). However, for Open Water certified divers and above, it’s a great place to visit and extremely likely not to be at all crowded with other groups. Diving at Garang Heng needs to be timed carefully, as medium to strong currents and surface waves can make it difficult to ‘hit the dive site’ or return to the boat easily. 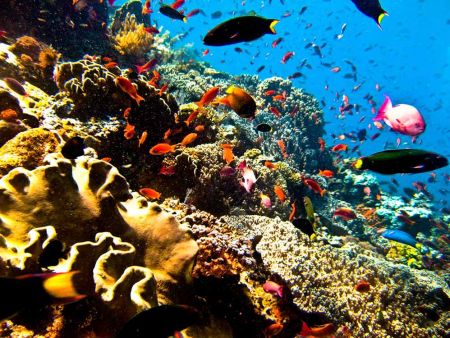 Garang Heng Koh Phi Phi Photo by Ilse Reijs & Jan Noud Hutten If, during a slack tide, there is little or no current, divers can easily descend to the pinnacle in their own time. And at times when larger-than-comfortable waves are present, Koh Lanta liveaboard boats tend to avoid this dive site. Although the boats themselves are sturdy and stable, it can be trickier than it needs to be to get back on the boat after a dive, or even wait at the surface to be recovered. This information should in no way discourage divers from visiting Garang Heng. The tour leader and captain will make the best decision, and in the right conditions, this is a great dive site, especially considering there are likely to be very few or no other boats there at the same time.

Lionfish (Pterois Pterois) Photo by Ilse Reijs & Jan Noud HuttenThe topography of Garang Heng is quite simple to explain, but a joy to experience. A cylindrical pinnacle rises up out of the sandy seabed from a depth of about 23 metres and its peak is about 6 metres from the surface. There are lots of healthy corals and anemones to provide food and shelter for the thousands of creatures which either call the dive site home, or visit regularly. Reef fish are to be found in vast numbers, which could be to do with the occasionally strong currents and/or lack of human activity. There is a very high possibility of seeing a Leopard Shark (Stegostoma fasciatum) while diving at Garang Heng. These docile sharks are real sharks, with teeth, but are no danger to humans. Their teeth are the grinding type, ideal for munching on shellfish and other bottom dwellers which they prey on at night. During the day, divers normally encounter them when they are trying to rest on the seabed. They tolerate divers approaching them and taking some pictures, but too many people getting too close will cause the sharks to ascend from their resting place and slowly swim away in search of some peace and quiet. While it’s nice to see the sharks actually swimming rather than sleeping, causing them to do this is neither fair on the sharks nor the next group of divers who may end up missing out altogether. Small Bamboo Sharks (Hemiscylliidae) are also seen here at Garang Heng from time to time. These are similar to Leopard Sharks in as much as they try to rest during the day and are no threat to humans. It’s most common to see just their rear halves or their pectoral fins, as they attempt to shelter under rocks and corals. Quite the opposite to Bamboo Sharks are Moray Eels (Gymnothorax), which only show their front halves during the day. These ferocious-looking eels are interesting to see, and easy to spend time looking at. While their appearance and mouthing actions look scary, they’re just forcing water past their gills without swimming. Moray Eels can be found in holes and crevices at all depths, with the Giant Moray Eel (Gymnothorax javanicus) the most common. This species is brown with some black spots here and there. Other species are more colourful, but not nearly as common. 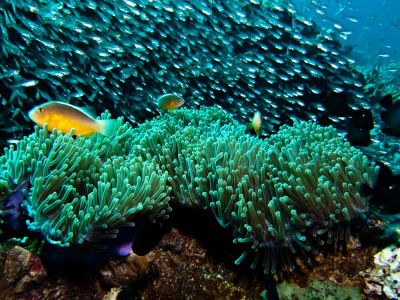 Skunk Anemone (Aphiprion Akallopisos) Photo by Ilse Reijs & Jan Noud HuttenSwimming around the hard and soft corals alone, or resting in barrel sponges, there are always a few Lionfish (Pterois) at Garang Heng. They fear nothing, as they are both colourful and venomous. Photographing Moral Eels and Lionfish is not normally difficult, and these species are as popular with underwater photographers at Anemonefish (Amphiprioninae). Clown, Skunk, Saddleback, and Clark’s are three species of Anemonefish commonly found in these waters. There are plenty of other creatures here at Garang Heng. Some are invertebrates, and difficult to notice, mainly to due camouflage. Others include larger reef and pelagic fish species. Barracuda (Sphyraena), Snapper (Lutjanus) and Fusiliers (Caesionidae) being three examples.

Garang Heng is just about the right size to enjoy in a one-hour dive. It’s neither too big nor too small. In the right diving conditions, it’s easy enough for most divers to descend to the bottom then enjoy the dive site at a reasonable speed, without having to race around or see the same spots more than once. At the end of the dive, the safety stop is most commonly performed above, rather than at, the reef, and this is when groups need to stay together. The currents may have changed and there’s no mooring line for the dive boat. The most important thing is to keep an eye one one’s Divemaster and staying quite nearby him or her. If the tour leader has decided that Garang Heng is good to dive on a particular occasion, then it’s almost guaranteed to be an enjoyable experience.